This year marks the 30th anniversary of the use of laboratory tests to screen pregnancies for Down syndrome. The tests have evolved over the last three decades and as have their ability to detect affected fetuses. Currently there are several different lab tests available to screen for Down syndrome during pregnancy, including the recently developed cell-free DNA tests (commonly referred to as non-invasive prenatal testing, or NIPT).

How has the landscape of Down syndrome screening evolved over the last few decades? That was the question considered by investigators of a recent report that sought to determine the number of women screened for Down syndrome in the United States in 2011 and 2012, along with the type of test they received.

The results of this report were based on surveys completed by 168 laboratories that offered Down syndrome screening tests in 2011 and/or 2012 and are rather interesting: 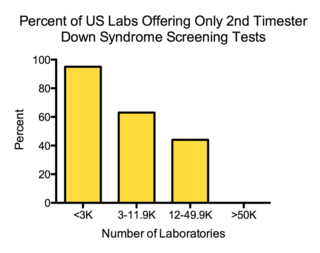 That last bullet point is an important one because nearly 70% of women have their first prenatal visit in the first trimester and it is recommended that integrated screening be offered at this visit. However, because the number of laboratories offering only second trimester testing is much greater than the number of labs that offer all types of screening tests, this recommendation may not be easily adopted.

Should DNA-based tests for Down syndrome screening replace biochemical tests?

In a previous post I described the clinical performance of DNA-based screening tests for fetal aneuploidies like Down syndrome.  Overall, these tests have excellent detection rates (~99%) with very low false-positive rates (~0.2%).  In other words, these tests are about 99.0% sensitive and 99.8% specific.

With performance like that one might expect these to be considered diagnostic tests.  They are not! Although quite good, test results must not be interpreted as definitive evidence that a fetus does or does not have an aneuploidy.  Recent recommendations from the American College of Obstetricians and Gynecologists (ACOG) are quite clear on that issue.

In those same recommendations, ACOG also states that DNA-based screening tests may be performed only on women who are at increased risk of having a fetus with aneuloidy.  Among the indications listed for women considered to be at increase risk are:

The ACOG is right to avoid recommending that DNA-based screening tests are acceptable to use regardless of risk factors.  Unfortunately, many women who are not at increased risk are using these new tests as a primary screening test and that's not a good idea. 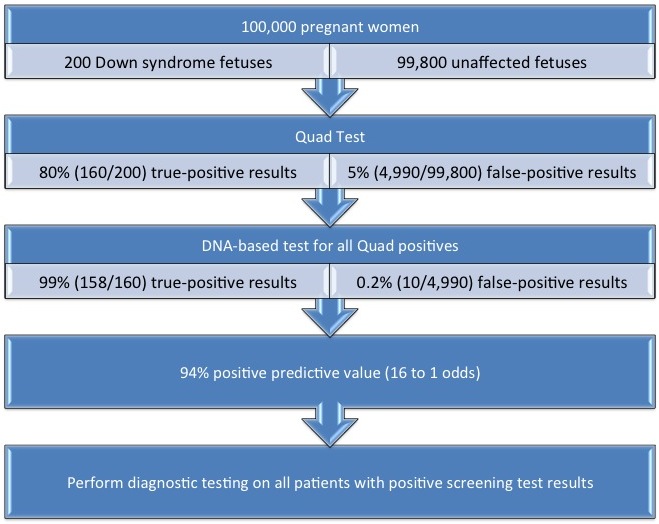