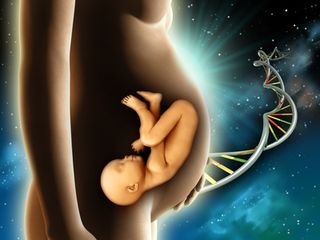 Personalized medicine can be defined as customized disease prevention therapies and drug treatment protocols based on knowledge of an individual’s unique genetic makeup, metabolic profile and clinical presentation. So far, personalized medicine has focused on the prevention and treatment of conditions affecting adults such as cancer and cardiovascular disease.  However pregnancy is a unique situation where the unique characteristics of two individuals are being assessed: mother and infant. Remarkably few studies have addressed the therapeutic implications of recent advances in genetic technologies for the fetus. Focus has been more on prenatal diagnosis than on fetal treatment. As molecular technologies advance and costs decrease, targeted genetic testing and even whole genome sequencing of the fetus are likely to become more available. This brings with it a number of ethical issues especially as it relates to testing of the infant. For instance, there are questions of informed consent, confidentiality of results, the clinical significance of genetic polymorphisms and decisions to terminate pregnancy on the basis of these test results.

Nonetheless, there have been some interesting advances in personalized medicine, for both mother and fetus, during pregnancy. This is the focus of an upcoming symposium at the AACC meeting to be held tomorrow, July 29th, at 10:30 am in Atlanta, Georgia.

Predicting Response to Drugs:  Sixty-four percent of women in the US are prescribed more than one drug during pregnancy (excluding vitamins). A better understanding of how drugs are metabolized during pregnancy and how they affect the fetus is clearly needed. Cytochrome P450 is the predominant class of oxidative enzymes that catalyze many types of drugs. Interestingly, the expression of a number of P450 genes is altered during pregnancy. Most notably, CYP1A2 has been shown to be decreased by 65% by the 3rd trimester. In the past several years, several studies have examined the ability to predict a woman’s response to drugs used during pregnancy, like tocolytics and anti-emetics, based on their genotype. A study by Haas, et. al. demonstrated that CYP3A5 high-expressing women had lower circulating concentrations of Nifedipine, a common tocolytic. A study by Lehmann, et. al. demonstrated that a genotype for serotonin receptor subunits 5-HT3A and 5-HT3B may play a role in hyperemesis severity and response to anti-emetics. This type of genotyping is not yet ready for prime time, but it holds promise for better utilization of medications during pregnancy.

Assessing the Fetus: We have blogged previously about cell free fetal DNA (cffDNA) in maternal blood and its utility in predicting fetal trisomy. cffDNA can also be used to assess fetal Rhesus D (RhD) status. This method can be used to determine the fetal RhD genotype when the mother has clinically significant alloantibody to the D antigen AND the father is heterozygous for RhD or is not available for testing. Testing such as this is useful because instead of treating all RhD-negative women with RhD immunoglobulin, treatment can be targeted to mothers that carry RhD-positive fetuses. This type of approach can conserve supplies of therapeutic anti-D, prevent unnecessary administration of a human-derived blood product to a vulnerable patient group, and avoid subjecting RhD-positive infants to intensive antenatal monitoring to predict and treat fetal anemia. Interestingly, despite the fact that the American College of Obstetricians and Gynecologists support the use of cffDNA for RhD assessment, it is not a widely used clinical tool in the United States.

Predicting Viability: Not all personalized medicine is genetic. Personalized medicine can also be used to guide treatments. With this in mind, there are several publications that suggest novel uses for hCG testing. The first takes advantage of “semi-quantitative” urine hCG devices. These devices are similar to home pregnancy devices, but they essentially contain multiple detection strips with different cutoffs that can give the reader a rough estimate of the urine hCG concentration (>25, >100, >500, >2000 or >10,000). Several studies have examined the use of these devices in a home setting following medical abortion as a replacement for clinic follow-up. If the woman is able to demonstrate decreasing hCG concentrations at home, she can avoid a return visit to the clinic. This can reduce the burden on the healthcare setting, but it could also help women for whom getting to a clinic is difficult because of work or family commitments or who live in a remote geography. Both studies demonstrate that use of semi-quantitative hCG devices in this setting had 100% sensitivity to detect unsuccessful abortions. The second interesting use for hCG measurement is in the prediction of fetal viability. Several studies have suggested that urine and serum concentrations of hyperglycosylated hCG (hCG-H) are low in women with pregnancy failure. These studies suggest that measurements of serum or urine hCG-H to detect failed pregnancy is 60-70% sensitive and 97-100% specific (links here and here). These studies are small and there is not currently a readily accessible assay for hCG-H, but it is intriguing to think about the possibility of a test that could distinguish viable from non-viable pregnancies especially in an emergency setting when physicians are making treatment decisions and have to take into account potential risks to the fetus.