Many women choose to delay starting a family for various reasons, but how long is too long to wait? Is there some way to determine the time remaining on a woman’s “biological clock” to help guide family planning? A new biomarker measured in blood, anti-Müllerian hormone (AMH), has been proposed to do exactly that but there are some important limitations that must be considered before rushing out to the closest doctor’s office to request an AMH measurement.

Unfortunately, it’s not quite that simple. While elevated AMH concentrations do reflect a large number of immature follicles, this doesn’t necessarily guarantee fertility. Polycystic ovary syndrome (PCOS) is a condition marked by the presence of many immature AMH-secreting follicles and women with PCOS typically have elevated serum/plasma AMH concentrations. AMH has been shown to inhibit the effects of FSH and AMH excess prevents immature follicles from reaching the final stages of development, resulting in impaired fertility for many women with PCOS. While an AMH concentration within the age-appropriate reference interval is a favorable indicator of fertility, higher is not necessarily better as very high AMH concentrations may indicate an underlying anovulatory condition.

Currently, the most appropriate clinical use of AMH measurement is to predict response to ovarian stimulation in women undergoing in vitro fertilization (IVF). Women with a high AMH concentration (and a large number of immature follicles) who undergo IVF are at increased risk of ovarian hyperstimulation syndrome (OHSS), a potentially fatal condition marked by abdominal fluid retention, blood clots, altered electrolyte concentrations and kidney failure. Using a moderate ovarian stimulation protocol in women with a high AMH concentration has been shown to reduce the risk of OHSS while increasing the number of pregnancies and live births per IVF cycle started. At the other end of the spectrum, women with a low AMH concentration are enrolled in a more intensive stimulation protocol to maximize egg retrieval while those with undetectable AMH are offered alternate treatment options as the chance of IVF success is low.

It’s possible that one day AMH may be routinely measured to predict the onset of menopause but for now, its most promising uses are limited to PCOS diagnosis (still some kinks to be worked out there too) and customization of ovarian stimulation protocols to improve IVF outcomes while minimizing the occurrence of OHSS.

“Should I freeze my eggs?” 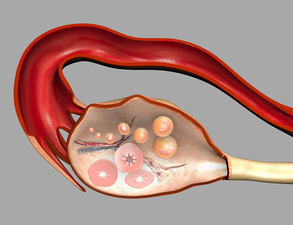 "A question some women face: when to freeze their eggs." This was the start of a news piece I heard on NPR as I drove to work this morning. It caught my attention and I realized we haven't spent much time on this blog exploring the tests used to help achieve pregnancy.

The premise of "ovarian reserve" testing is rather straightforward: they are supposed to help a woman concerned about fertility decide whether she should freeze her eggs for future use or if she can wait to conceive because time is still on her side.

Unlike sperm, which are produced continually over a man's reproductive lifetime, the number of eggs in the female ovaries peaks during fetal development, declines over time, and do not regenerate. Thus, female fertility declines with each year of life. Tests of ovarian reserve are supposed to reflect the number and quality of remaining eggs, a key element in reproductive potential. Ovarian reserve tests include both blood tests and ultrasound tests. This post will focus on the blood tests.

With normal ovarian function, the developing eggs in the ovary secrete hormones which keep the concentration of follicle-stimulating hormone (FSH) in its normal range during the first few days of the menstrual cycle. When the number of developing eggs is decreased, the concentration of FSH is increased. Thus, measuring FSH on day 3 of the menstrual cycle is a test of ovarian reserve and higher values are associated with lower fertility.

Estradiol is released from developing eggs during the first few days of the menstrual cycle. Estradiol concentrations are usually low during days 2-4 but increase thereafter. A high value at this time suggests poor ovarian reserve.

Anti-Müllerian hormone (AMH) is produced by the granulosa cells of eggs and so its concentration reflects the size of the ovarian pool of eggs. As the number of eggs declines, so too does AMH. But while the concentration of AMH predicts the quantity of eggs, it does not predict their quality.

Inhibin B is another hormone released by eggs and so it is similar to AMH in evaluating the number of eggs in the ovary. Because inhibin B helps to regulate FSH concentrations, a low inhibin B is associated with a high FSH. Unlike AMH, inhibin B shows a lot of variation across menstrual cycles so it's not a recommended test of ovarian reserve.

Clomiphene is a selective estrogen receptor modulator that causes the pituitary gland to release the hormones needed to stimulate ovulation. This test is performed by measuring FSH on cycle day 3 (before giving Clomiphene) and again on day 10 (after giving Clomiphene, daily, on days 5-9). In women with normal ovarian reserve, the rising inhibin B and estradiol concentrations produced from the developing eggs would suppress FSH. However, in women with decreased ovarian reserve, FSH is elevated on day 10 due to the lower concentrations of inhibin B and estradiol.

Not surprisingly, no single test is adequate to evaluate a woman's ovarian reserve. To address that, it is not unusual for doctors to perform several of these tests in an effort to provide a more definitive answer. Unfortunately, there is still no universally agreed upon definition of "decreased ovarian reserve" and evidence of decreased reserve (biochemical or otherwise) does not correlate very well with the inability to conceive.

So while there is a very strong desire to have definitive tests to predict a woman's fertility potential in an effort to help her decide if she can wait to conceive or take action such as harvesting and freezing eggs for future use, such answers are not yet available from lab tests alone.