“Why is the pregnancy test positive if she’s not pregnant?”

This is a question I’ve been asked several times and it’s a good one.  The query usually comes from a nurse, doctor, or other healthcare provider after performing a test for human chorionic gonadotropin (hCG) and getting a positive or elevated result that they did not anticipate.

Because hCG is a hormone normally produced during pregnancy, hCG tests are used to diagnose the pregnant patient.  That makes it easy to think of hCG tests as “pregnancy tests.”  While that’s not an inaccurate label for them, identifying hCG tests as pregnancy tests gives the impression that is all they are supposed to do.  Technically, hCG tests are designed to qualitatively detect and/or measure the hormone in urine or blood and there are other reasons besides being pregnant that can cause hCG to be present.

I can think of four different reasons why hCG could be present in a non-pregnant woman.

So, just because an hCG test result is interpreted as positive doesn’t automatically mean that a woman is pregnant.  There are very valid reasons for detecting hCG in the absence of pregnancy.  That said, when the hCG test result doesn’t match the clinical picture, the laboratory should still be asked that question!  When alerted to the discrepancy, the lab can help to investigate the problem and perhaps shed some light on the cause.

There is quite a bit more to say on each of those four causes but I’ll save those comments for future posts.

hCG and the thyroid gland 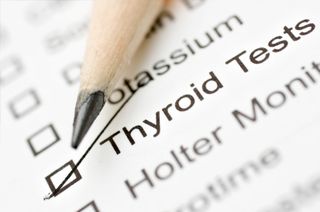 As a reminder, the thyroid gland, located in the neck in close proximity to the larynx (voice box), is basically responsible for controlling our body's metabolism. It is regulated by a different hormone: thyroid stimulating hormone or TSH.

So hCG maintains pregnancy and TSH regulates the thyroid gland. Sometimes, however, hCG can act like TSH and crank up the function of the thyroid gland. When the thyroid gland is in an over-active state the condition is called hyperthyroidism. Symptoms of hyperthyroidism include weight loss, increased appetite, heat intolerance, hair loss, weakness and fatigue, irritability, and sweating. In extreme cases, hear palpitations, and shortness of breath can occur. How can hCG cause hyperthyroidism? The answer lies in the molecular structure of these two hormones.

As it turns out, hCG and TSH are rather similar to each other. Both are composed of two different protein subunits. One of those protein subunits is called "alpha" and the other "beta." The alpha subunits of hCG and TSH are identical but the beta subunits are a different; but not by much. The beta subunits of hCG and TSH are about 40 percent identical. When present a very high concentrations, hCG can actually stimulate the thyroid gland sending it a message to go into over-drive. In other words, hCG can sometimes act like TSH. Fortunately, this doesn't happen unless the amount of hCG in the blood gets to be very, very elevated.

How elevated? Well, that has been the subject of some recent investigations. Conventional wisdom was that hyperthyroidism could occur in women with an hCG concentration that was greater than 50,000 IU/L. While this hCG concentration may seem very elevated, it's actually quite normal in pregnant women who are in their first trimester. Because the vast majority of pregnant women in early pregnancy do not have symptoms of hyperthyroidism, the 50,000 IU/L threshold didn't seem accurate.

Another study reported that women developed suppressed TSH and/or symptoms of hyperthyroidism only when the hCG concentration was greater than 100,000 IU/L.

A normal, singleton, intrauterine pregnancy doesn't usually produce such sustained elevations of hCG. This means that the vast majority of pregnant women will never have symptoms of hCG-induced hyperthyroidism. However, extreme elevations of hCG can be produced in women with gestational trophoblastic disease (GTD). These are a family of diseases that arise from an abnormal fertilization event so hCG is produced even in the absence of a viable fetus.