OK.  I know I've written a lot about false-positive hCG tests already, both in February and earlier this month. Bear with me as I still have more to say on this issue.

I spoke on the topic of hCG testing at a clinical lab science conference a couple of weeks ago and got this question from someone in the audience:

"I was told that one way to investigate a possible false-positive, quantitative hCG result obtained from a serum sample was to test the sample using a qualitative hCG test because interfering antibodies don't affect those tests; is that true?"

(If you are unfamiliar with the concept of interfering antibodies and want to learn more, read this.)

My response to this question was "No, that is not true."  I'm uncertain why one would think that qualitative serum hCG tests were somehow immune to any influence from interfering antibodies but that wasn't the first time I had fielded that same question.  Clearly, this is not an isolated misconception.

To support my response that qualitative tests can also produce erroneous results due to interfering antibodies I referred to a case report we described a short while ago.  You can find that report here.  The case describes a 46-year-old woman who was not sexually active yet whose blood sample produced a positive result using a qualitative serum pregnancy test.  Because the positive result was unexpected, her doctor asked us to measure the concentration of hCG in the same serum sample.  That result was less than 2 IU/L (normal is less than or equal to 5).

I don't know how often this scenario might occur but it's clear that labs shouldn't rely on the notion that a qualitative hCG test is immune to any influence from interfering antibodies.

In February, I wrote about interfering antibodies being the cause of false-positive hCG results from blood samples.  As a follow-up, I thought it would be a good idea to talk about what the lab can do to investigate the potential problem.

As a reminder: false-positive hCG results are often attributed to the presence of an interfering antibody in the blood sample.  Such was the case with Jennifer Rufer who was misdiagnosed with cancer due to a false-positive hCG blood test.  It's important to know that laboratories are likely not able to independently identify when an interfering antibody is present.  An interfering antibody should be suspected whenever the clinical picture of the patient fails to match the laboratory (in this case, hCG) results.  When laboratorians are asked to investigate the possibility of a false-positive hCG result there are several ways to do so but the key piece of information to note is that the lab has to be notified that there is the suspicion of an erroneous hCG result.  This is because the laboratory is nearly always unaware of the clinical picture of the patient.  We need to rely on our clinical colleagues to alert us to the possibility that an hCG test result is potentially incorrect.

So, what can the lab do when asked if an hCG blood test result is falsely increased?  There are several approaches the lab can take to investigate:

I recommend that laboratories use more than one of these investigations rather than rely on a single one.  As the Rufer case so clearly demonstrates, erroneous laboratory results can result in serious harm to patients.  Together with our clinical colleagues, it our responsibility to do all that we can to assure that laboratory test results can be correctly interpreted. 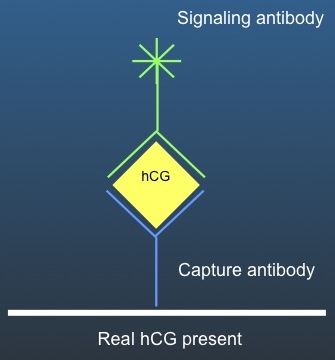 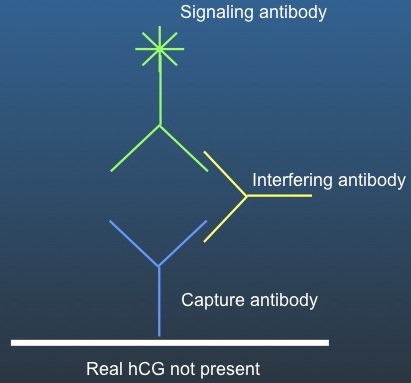 This was the cause of Jennifer Rufer's false-positive pregnancy test.  Unfortunately for her, the false-positive result was recognized for what it was only after she had been treated for what her doctors thought was an aggressive type of cancer called choriocarcinoma.

It's uncertain how many people have interfering antibodies in their blood.  Some estimate the frequency as high as 10-20%, other studies put that number much lower at <1%.  It doesn't really matter how many people have them but what does matter is how doctors and laboratorians work together to identify this problem when it occurs.  That's easier said than done.

Why?  Because the laboratory that does the testing is nearly always unaware of the medical history of the patient so it's practically impossible for the lab to know if an hCG result is inconsistent with the patient's condition.  The lab has to rely on the doctor to question an hCG test result when it don't fit what they are seeing in their patient.  If the hCG result doesn't fit the clinical picture and the doctor calls the lab for help, there are investigations the lab can do to help identify if an interfering antibody is present or not.  But without that call questioning the result, the lab doesn't have reliable mechanisms for identifying all cases of interfering antibodies.

First, though, a few comments about what a false positive result actually is.  Pregnancy tests are designed to detect hCG;the hormone produced by the placenta during pregnancy.  If the hormone is truly present in the urine and the test detects it, then that result is a true positive result.  In other words: hCG present = true positive test result.  However, because hCG is usually only produced during pregnancy,many people consider a positive result to mean that a woman is pregnant.  There's a big difference between those two meanings!  To summarize:

With that in mind, let's explore the causes of false positive urine pregnancy test results.