Last month I wrote about the many different tests used for Down syndrome screening.  Today, there are 6 different screening tests that a woman can choose from should she opt for any testing at all.  Selecting one can't be an easy task for most women and, given the relatively short time that most physicians have to spend with patients today, many simply follow their doctor's advice and don't truly understand their options.

The choice of which Down syndrome screening test to have depends on the answers to a few questions:

Nuchal translucency (NT) is an ultrasound measurement of space under the skin behind the fetal neck and is performed only during the first trimester.  An increased NT is strongly associated with Down syndrome and other chromosomal abnormalities.  It's a component of the Combined test, the Integrated test, and the Sequential test.

Chorionic villus sampling (CVS) is the removal of a small piece of placental tissue in order to obtain fetal cells in order to obtain the fetal karyotype.  The karyotype will identify the number of chromosomes the fetus has inherited and is usually only performed after an abnormal Down syndrome screening test.  This procedure is performed in the first trimester because amniocentesis can't be performed this early in pregnancy.

If the woman wants the earliest assessment of the risk of carrying a fetus with Down syndrome then she should opt for the Combined test.  The test is performed only in the first trimester and results are available sooner than with any of the other test options.  However, the test doesn't perform as well as some of the other tests.  On average, the Combined test detects about 85% of all Down syndrome fetuses at a 5% false-positive rate.

If she's willing to wait until the second trimester for the test results then the best screening test is the Integrated test.  This test gives the highest Down syndrome detection rate (about 95%).  The test can also be performed without an NT (the Serum Integrated test) and will provide the same detection rate with a slightly higher false-positive rate.

If the patient desires early risk assessment but is willing to wait for test results if needed, then the Sequential test may be appropriate.  The Sequential test reports results in the first trimester only if the risk of having a Down syndrome fetus is very high.  If the risk is not high, then results are not reported until the second trimester test is completed. 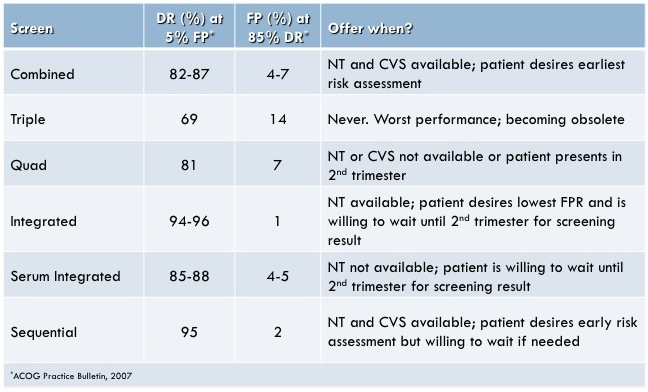