This post was written by Robert D. Nerenz, PhD, an assistant professor at the University of Kentucky, in Lexington. 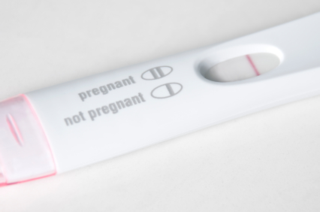 In previous posts, we have discussed false negative pregnancy test results caused by hCG beta core fragment (hCGβcf), the predominant form of hCG found in urine after six weeks of pregnancy. False negative pregnancy tests can result in undesirable outcomes (including loss of pregnancy) if inappropriate treatment is given. In a recent study evaluating the performance of devices used in a hospital setting, 9 of 11 devices were found to be susceptible to false negative results when used to test urine solutions containing hCGβcf concentrations observed in normal pregnancy.

After our study was published, we were frequently asked whether these devices actually performed poorly in clinical practice or if the results we observed only occurred in a controlled laboratory environment. To address this question, we searched the database of medical device malfunctions reported to the FDA (Manufacturer and User Facility Device Experience, or MAUDE) to find reports of false negative pregnancy test results in a clinical setting. Using the search term “MAUDE pregnancy false negative” we found 707 reports between 2000 and 2014 that described false negative urine hCG results in women shown to be pregnant at the time of testing. 91 different POC hCG devices were described from 14 manufacturers, including 10 of the 11 devices evaluated in our initial screening study.

Based on the description in the MAUDE report, we subdivided the false negatives by potential cause. In 433 reports the cause of the false negative result was unknown.  132 were likely because the hCG concentration was so low that it was below the limit of detection for the test device. Of these 132, nine were associated with adverse events. We also found 142 reports that were likely due to hCGbcf hook effect and ten (or 7%) of those were associated with adverse events, including delayed prenatal care, delayed treatment of ectopic pregnancy, performance of inappropriate imaging studies and even surgery leading to loss of pregnancy. In addition to the reports documented on the FDA website, it is virtually certain that many more false negative results have occurred and have gone unreported to the FDA.

The fact that false negative pregnancy test results occur relatively frequently in clinical practice was an important finding because it highlighted the limitations of currently available devices and emphasized that this problem is not limited to one or two devices. Rather, the fact that the vast majority of pregnancy test devices performed poorly in our study and were reported to generate false negative results in clinical practice indicates that this is a much larger problem.

To decrease the occurrence of false negative pregnancy test results, contributions from multiple different groups will be required. First, the FDA should insist that device manufacturers market devices that generate positive results in all pregnant women, including those with high urine concentrations of hCGβcf. Second, clinicians at large hospitals should request that pregnancy testing be performed on serum using a quantitative assay, especially in patients with abdominal pain, vaginal bleeding or other symptoms that strongly suggest the patient might be pregnant. Quantitative serum assays can generate results in less than an hour, can detect lower concentrations of hCG than point-of-care test cartridges and are not affected by hCGβcf because hCGβcf is not present in serum. Lastly, laboratorians should work to decrease the time required to generate test results in order to make quantitative testing more appealing to clinicians. At institutions where urine point-of-care testing must be performed, laboratorians should evaluate all available options and select the device that provides an optimal combination of sensitivity and lack of susceptibility to interference caused by elevated concentrations of hCGβcf.

Unfortunately, currently available pregnancy test devices present a risk to patients. It is our hope that a coordinated effort from the FDA, manufacturers, clinicians and laboratorians will eliminate that risk.