In the past, we have blogged about false negative urine qualitative hCG tests in both point-of-care (POC) hospital devices and over-the-counter (OTC) devices due to the presence of high concentrations of hCGbcf. We feel this represents a real problem for patients and clinicians trying to diagnose pregnancy and could results in harm to mother and/or fetus.

It is our understanding that the FDA is requiring device manufacturers to address this problem in any new devices going through the FDA approval process. However, it is up to manufacturers if they want to voluntarily change their existing devices. Hence we have urged manufacturers to modify their devices to eliminate false negatives due to hCGbcf.

Recently, we were made aware of two manufacturers that had apparently modified their qualitative pregnancy devices: The Cen-Med Elite Plus One-Step Pregnancy Test (a hospital POC device) and the First Response Early Result OTC device (an over-the-counter device). In order to evaluate these modifications we compared the old and new devices using the screening test we have developed previously.   Our results demonstrated that indeed, the new version of each device perform better than the previous version.  Both original devices demonstrated significantly diminished signal when 500 pmol/L hCG was tested in the presence of 500,000 pmol/L hCGbcf. However the modified devices gave faint or clear positive signals in the presence of the same hCG concentrations (see figure). 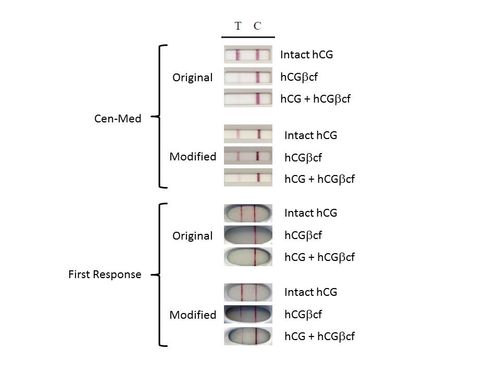 It is clear that improvement of qualitative urine hCG devices is possible and we encourage all manufacturers to design devices that are not inhibited by hCGbcf.