Just over 3 years ago, I blogged about the declining use of fetal lung maturity (FLM) tests and questioned their clinical usefulness. I wanted to revisit this same issue again because a recent report has validated my sentiments. Actually, there have been two recent reports on this topic but the authors on that second report include myself and my co-blogger, Dr. Ann Gronowski, so in the interest of impartiality, I won't discuss our article here.

Historically, FLM tests have been used to determine the maturity of fetal lungs for a wide variety of indications (see table below) with the intent to deliver the infant if lung maturity was demonstrated. 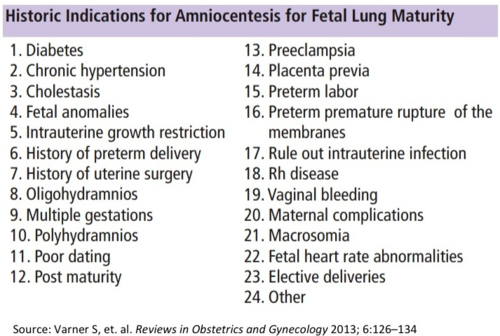 The authors of the report observed an incredible amount of disparity between doctors at different centers in regards to the use of FLM tests for different indications. Further, they speculated (accurately, I might add) that this lack of consistency suggested that as obstetricians became more comfortable with performing amniocentesis, more amniocenteses were performed which, in turn, expanded the reasons for FLM testing! They point out that this could be a major reason why there was an increase in late preterm deliveries in the United States. It was a classic self-fullfilling prophesy: more amniocentesis for FLM testing lead to more non-term deliveries when fetal lung maturity was demonstrated.

The authors then point to studies that have clearly demonstrated that infants delivered before 39 weeks of gestation are at increased risk of adverse outcomes. Obviously, this argues against such practice and elective delivery before 39 weeks is strongly discouraged by major medical associations. Indeed, it's the number one recommendation of the American College of Obstetricians and Gynecologists in the Choosing Wisely campaign. In light of compelling evidence, the authors state that "the only remaining indications (for FLM testing) are restricted to those patients in whom accurate fetal dating is absent."

I could not agree more with these authors! If you want to hear more, you can watch a short video of me discussing this topic here.

FLM testing is being used with much less frequency than it has in the past and that's a good thing. Healthcare reform (in the US) is focusing its lens on quality healthcare practices and laboratory tests that don't contribute in a positive way should not be performed. I would argue that, with rare exceptions, FLM testing is not clinically useful. I have no doubt that if they were to vanish overnight the medical community would barely take notice. I look forward to that day.