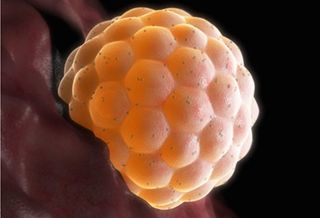 Preimplantation genetic testing is a way of examining the genetic features of a developing embryo during the process of in vitro fertilization, before pregnancy. After the egg is fertilized with sperm, the embryos develop to the cleavage-stage. On day 3 after fertilization, a single blastomere is removed from the embryo for genetic evaluation using techniques such as PCR, FISH, or comparative genomic hybridization.

Preimplantation genetic screening (PGS), is not used to detect disease, but as a screen to select embryos for such things as: matching HLA type in order to be a tissue donor for an affected sibling, selecting gender, selecting embryos with the least predisposition for developing certain cancers, and selecting embryos with a higher chance of implantation and therefore increase the likelihood of achieving pregnancy. Medscape has an excellent overview of PGD and PGS.

For women of advanced maternal age or couples with known genetic mutations, the ability to screen for embryos free of certain genetic mutations is reassuring. However, as with many medical interventions associated with human reproduction, PGS has raised ethical questions. For instance, as stated earlier, PGS can be used to select for a preferred gender. In some cases this is to avoid a sex-specific disease. Other times this is done for so-called "family planning" or "gender balance." In other words, selecting a gender because of personal preference. Some feel this is discriminatory and should not be allowed. In other cases, embryos have been tested so that the resulting child would be compatible to serve as a stem cell donor for a sick sibling (much like the popular fiction book "My Sister's Keeper").   There have also been cases where parents have requested the selection of affected embryos so that the child has the same minor disability, such as deafness or dwarfism, as the parents. Some preimplantation genetics laboratories agree to do this type of testing and some do not.

The New York Times recently ran an article discussing this issue. The article states that:

"In the United States, there are no regulations that limit the method’s use. The Society for Assisted Reproductive Technology, whose members provide preimplantation diagnosis, says it is 'ethically justified' to prevent serious adult diseases for which 'no safe, effective interventions are available.' The method is 'ethically allowed' for conditions 'of lesser severity' or for which the gene increases risk but does not guarantee a disease."

The January issue of Clinical Chemistry published a Question and Answer piece entitled "The Ethical Implications of Preimplantation Genetic Diagnosis." A podcast interview with two of the authors is also available.

The paper summarized the opinions of an ethicist, an attorney, and the director of a preimplantation genetics laboratory. The ethicist indicated that in the past, PGD has focused mainly on reducing the risk of transmitting serious diseases. In the future, he sees a shift away from lifesaving interventions to more ‘eugenically’ inspired interventions. That is, looking for traits that parents do not want in their children and selecting for traits that they do want in an attempt to pass them on. The morality of eugenics is a key moral as this technology moves forward.

Indeed it will be interesting to see where the future of this technology lies. Although it is practiced routinely, the indications, utility, and outcomes of PGD and PGS are still being defined.