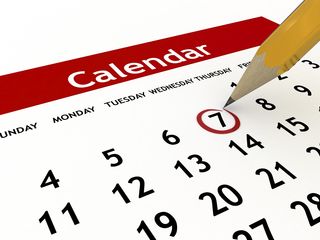 I'm beginning to wonder what could possibly come next. Last month, Swiss Precision Diagnostics (via its Procter & Gamble partner) unveiled its newest product in consumer diagnostics: the Clearblue Advanced Pregnancy Test with Weeks Estimator. This urine hCG test determines pregnancy status but also provides an estimate of the number of weeks since ovulation. The device has been cleared by the FDA and will be availabe in the US in September, 2013.

It works like other qualitative urine hCG tests but the body of the device contains two test strips that capture and detect the hormone in the urine sample. Detection of hCG is accomplished by the appearance of a colored band at a specific location on the test strip.

One test strip is designated "high sensitivity" and can detect a low concentration of hCG (detection limit of 10 IU/L). This test strip determines pregnancy status (pregnant or not pregnant). The other test strip has "low sensitivity" and detects higher concentrations of hCG and is used to estimate the number of weeks since conception. An optical reader housed within the device determines the color intensity of the test strips and a digital display reports the results as 1) Not pregnant; 2) Pregnant 1-2 weeks; 3) Pregnant 2-3 weeks; or 4) Pregnant 3+ weeks. The device reports an invalid result if there is a malfunction due to the device itself or operator error.

Note that the weeks estimate is based on hCG concentration which is not how a pregnancy is usually dated. Physicians calculate gestational age by the day of the last menstrual period (LMP) so the device's estimate will be about 2 weeks less than one based on the LMP.

In its press release, Procter & Gamble states that the test is "more than 99 percent accurate in detecting pregnancy from the day of the expected period, and it is approximately 93 percent accurate in estimating how many weeks based on time since ovulation." I wanted to know what studies were done to support those claims but I received no response when I reached out to the individual at Procter & Gamble identified in the press release. However, there are some data included in the FDA's decision summary:

From a practical perspective, while women may want/need to know when they conceived, this is not the device to accomplish the job. It seems to provide highly variable information that, at best, is just a curiosity. Procter & Gamble says “confirming pregnancy is a life-changing moment in any woman’s life, and it sparks so many immediate questions like 'when did I get pregnant?'" True, but necessary? I'm not convinced.