Rupture of membranes (ROM) is the term used to describe the breaking of the amniotic sac, as normally occurs before the onset of labor. If this happens earlier than the 37th week of pregnancy it is called preterm ROM (PROM). It’s a condition that can lead to a preterm birth, or, if very early, a preterm, premature birth. 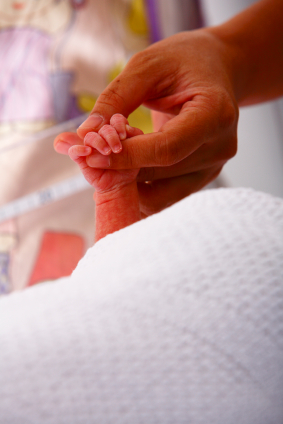 When PROM happens, there is an increased risk of complications due to intrauterine infection, umbilical cord compression, and the neurodevelopmental disorders that are associated with a preterm delivery. Diagnosis of PROM is particularly important when the gestational age is incompatible with a viable birth, often considered to be a fetal age less than 24 weeks. In such cases, medical intervention is necessary to preserve the chances for a live birth.

Suspected cases of PROM are often investigated by laboratory analysis of fluid obtained from the vagina to detect properties or substances that should otherwise not be present unless the fluid contains amniotic fluid due to PROM. The simplest forms of testing are measurement of acidity (pH) of the fluid, or a test called "fern" testing. Fern testing refers to the fern-like appearance of amniotic fluid when it is dried on a glass slide. Both of these tests aren’t very accurate and so other tests have been developed to better identify patients with ruptured membranes.

These other tests are designed to detect molecules that are normally present in amniotic fluid but not vaginal fluid. For example, tests have been developed that detect alpha-fetoprotein (AFP) or insulin-like growth factor binding protein-1 (IGFBP-1). The presence or absence of these molecules in the specimen are determined by a lateral flow immunoassay. The assay works like commonly performed tests for human chorionic gonadotropin (hCG) (aka pregnancy tests).

These tests are highly sensitive to low concentrations of these molecules, which is both good and bad. It’s good because they can detect small amounts of the molecules and lead to a more accurate diagnosis. It’s bad because these two molecules are also present in maternal blood which means that if a sample is contaminated with blood, the certainty of a positive test to detect amniotic fluid is called into question.

From the doctor’s perspective, a practical advantage of the immunoassays is that their results are binary – the result is either positive or negative — whereas the pH test and the fern test are more subjective and difficult to interpret definitively. However, the AFP and IGFBP-1 tests may be subject to false-positive results as the gestational age of the fetus approaches term. This suggests that, at later stages of pregnancy, these biomarkers may signify imminence of delivery.

The gold standard, or best test, to diagnose rupture of membranes is a dye test, in which a colored fluid is injected into the amniotic fluid followed by direct observation to see if the dye subsequently appears in the vaginal pool fluid. Also, ultrasound imaging of the amniotic fluid volume may also assist in diagnosis of PROM, but in individual cases such imaging may be difficult to interpret. Given the low but finite risk of complications of the dye test, the AFP and IGFBP-1 tests are often preferred as first-line tests for preterm premature rupture of membranes.