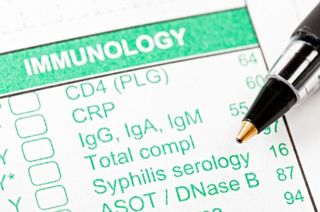 Recently, I blogged about TORCH testing  (sometimes called TORCHES).  The "S" in TORCHES stands for Syphilis. Syphilis is a sexually transmitted infection caused by the spirochete bacterium Treponema pallidum. Syphilis can present in one of four different stages: primary, secondary, latent, and tertiary.  Many people infected with syphilis are asymptomatic, but can be at risk for complications if the infection is not treated. Syphilis is transmitted from person to person through direct contact with a syphilis lesion or sore.  These lesions occur most frequently on the vagina, anus, rectum or external genitals. The bacteria may also be transmitted from mother to fetus during pregnancy or at birth, resulting in congenital syphilis which can cause stillbirth or infant death shortly after birth. Untreated babies may become developmentally delayed, have malformations, seizures, or die. Here I'll discuss further syphilis testing.

The CDC 2010 "Sexually Transmitted Diseases Treatment Guidelines"  recommend that pregnant women be screened on their first prenatal visit for sexually transmitted diseases such as Syphilis.

Blood tests for syphilis are divided into nontreponemal and treponemal tests.

Nontreponemal tests are used for the screening of pregnant and non-pregnant people, and include venereal disease research laboratory (VDRL) and rapid plasma reagin (RPR) tests. These tests do not detect antibodies against the actual bacterium, but rather for antibodies against substances released by infected cells when they are damaged by T. pallidum (e.g. cardiolipin). Nontreponemal tests are inexpensive, relatively rapid to perform, and widely available. They can detect an active infection and will become negative over time with proper treatment, therefore, they can be used to follow therapy.  The diagnostic sensitivity of these tests varies between 80-90% for detecting primary infection, and their specificity is approximately 98%. However, because there are occasionally false positive results, confirmation of all positive nontreponemal test results is required. This is accomplished by using a more specific treponemal test.

Treponemal tests detect antibodies that are specific to T. pallidum. These tests include treponema pallidum particle agglutination (TP-PA) or fluorescent treponemal antibody absorption test (FTA-Abs). These tests cannot distinguish between past and current infection because the antibodies are generally present for life. Treponemal tests have diagnostic sensitivities of about 84-88% for detecting primary infection and close to 100% for detecting later infections. They also have specificities >95%. However, testing is time and labor intensive.

Syphilis is often diagnosed by using a nontreponemal screening test first and then performing treponemal tests on any positive samples. However the interpretation of a nontreponemal test is subjective and so this approach does not allow for high test throughput. In the last few years, a number of automated treponemal enzyme immunoassays (EIA) have been developed for the diagnosis of syphilis. A recent paper compares the clinical utility of seven of these assays.   The authors of this study concluded that the automated treponemal assays have sensitivities and specificities comparable to the FTA-Abs test (considered to be the gold standard) and a consensus panel of treponemal tests resulted in an overall concordance of 95-99%. They also concluded that the cost and turnaround time of the automated assays are comparable to the FTA-Abs test with the benefit of less hands-on time and more objective results.  This would be especially true for large laboratories that process a large number of samples.

Recently, the Centers for Disease Control and Prevention (CDC) and the Association of Public Health Laboratories (APHL) convened an expert panel to evaluate available information and produce recommendations that will ultimately result in the development of Guidelines for the Laboratory Diagnosis of syphilis testing in the U.S. the Meeting Summary Report are currently available and provide a summary of what was discussed.  It is anticipated that the formal Testing Guidelines will be released in 2011.  The summary states that in areas with a low prevalence of syphilis, samples may be screened using a treponemal-specific EIA and those with positive results analyzed with a nontreponemal test to assess for an active disease state and treatment status. This is the reverse of what is currently practiced.

However, there is a potential problem with this new algorithm. The use of a treponemal test (FTA-Abs or treponemal EIA) for screening purposes can result in patients who are positive by a treponemal-specific screening test yet are negative by nontreponemal tests. This can occur in patients with past or recently treated syphilis and in patients with very early or late/latent disease. Therefore, physicians must review patient disease and treatment histories in order to properly interpret syphilis testing results. In addition follow-up FTA-Abs testing may be required. Several publications have examined the "reverse syphilis algorithm" in practice.

So what is the current thought? Currently, the CDC still recommends using a nontreponmeal screening test and treponemal test as confirmation of syphilis. The traditional algorithm is designed to identify patients with active syphilis while minimizing false-positive results in populations with a low prevalence of syphilis. Although the reverse syphilis algorithm has some attractive features, such as automation of testing, objective results, and detection of latent syphilis, it may not be suitable in all clinical situations.