hCG > Surprising details about the most sensitive urine pregnancy tests

Here’s a multiple-choice question to consider:

Which type of qualitative urine hCG test devices (a.k.a pregnancy tests) are capable of detecting the lowest concentrations of hCG?

A. The devices that can be purchased at a local pharmacy for use at home (over-the-counter (OTC) tests).

B. The devices used in hospitals, clinics, and doctor’s offices (point-of-care (POC) tests).

C. Both types of devices are equivalent.

The correct answer is A.

Surprised? I was too. Logic suggests that the urine hCG tests that are frequently used in healthcare settings (versus home use) would probably do best at detecting the hormone at lower concentrations. 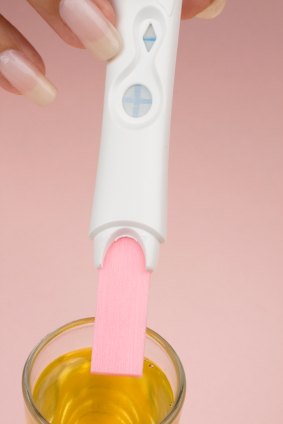 There have been two studies that have investigated the analytical sensitivities of urine hCG tests. One study used samples prepared by adding hCG to male urine to achieve hCG concentrations of 6.3, 13, 25, and 50 IU/L. Fifteen different OTC pregnancy tests were evaluated, twelve of which claimed an hCG detection limit of 50-100 IU/L (the other three claimed 25 or 40 IU/L). All but one of the fifteen devices produced positive results at an hCG concentration of 25 IU/L. Curiously, the one device that did not claimed a detection limit of 25 IU/L.

The other study (disclaimer: I was one of the investigators) used urine samples obtained from pregnant women within 10 days of their expected period. In my opinion, this is the optimal type of sample to use because pregnancy urine contains a mixture of different hCG variants and not just a single form of the hormone. That is important because not all pregnancy tests detect the same variants of the hormone equally and that, in turn, can influence device sensitivity. These urine samples were diluted to low hCG concentrations and then tested with both OTC and POC pregnancy tests. While all the devices claimed an hCG detection limit of 25 IU/L, we observed that they were capable of detecting hCG at much lower concentrations. The POC devices were sometimes four times more sensitive than claimed and the OTC devices were sometimes sixteen times more sensitive!

We suspect that home pregnancy tests have greater analytical sensitivity than their POC counterparts because of differences in the amount of urine the devices require. OTC devices absorb urine from the urine stream during voiding and, as such, they use a much larger volume of urine than the tests used in healthcare settings (approximately 5-10 times more).

To be certain, the physician who orders a urine hCG test on a patient has the same desire as the woman who performs her own urine test at home: they both want to know about pregnancy status. In the former scenario, the test is often being done to rule-out a possible pregnancy prior to a medical intervention that could harm a fetus. In the latter, the test is being done to satisfy a curiosity. Which test do you think should be the most sensitive?

The history of pregnancy tests