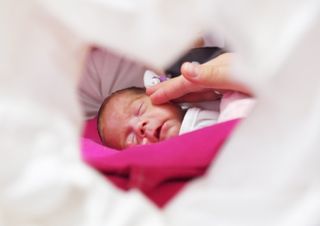 Preterm birth is a serious problem. Defined as delivery before 37 completed weeks, infants born preterm are at high risk of complications such as respiratory distress syndrome, bleeding into the brain, poor neurological development, and cognitive impairment. Further, preterm birth is responsible for ~75% of death in newborns without genetic anomalies.

Unfortunately, the vast majority of treatments provided to pregnant women with symptoms of preterm labor have done little to prevent preterm birth. About 13% of pregnancies end with preterm delivery and this percentage has increased steadily over the last few decades.

Risk factors for preterm birth include mother's age, socioeconomic status, and being pregnant with more than one fetus. A woman who has had a previous preterm delivery is also at risk of delivering subsequent pregnancies early as well. Preterm birth is also more common among black women compared to other ethnic groups which appears to be unrelated to socioeconomic status or other factors.

Symptoms of preterm labor are just like symptoms of term labor. However, early contractions occur frequently in pregnant women and don't always mean they are in actual preterm labor. In fact, most women with early symptoms go on to delivery term babies. This makes it difficult to diagnose true preterm labor when it occurs. A test that could accurately predict preterm labor would be helpful.

Currently there is only one lab test approved for use to predict preterm labor. Fetal fibronectin (fFN) is a protein produced by the fetal membranes during pregnancy. Although it can be detected in cervicovaginal fluid early in pregnancy it usually becomes undetectable between weeks 25 and 35. After that, it becomes detectable again after 37 weeks. In women with preterm labor, fFN can be detected in cervicovaginal fluid during the time that it is usually not present. This may occur because of a break down of the fetal membranes or in response to inflammation.

A recent study compared the ability of fFN and a interleukin-6 (IL-6), an inflammatory cytokine, to predict preterm birth. The tests were performed in 667 samples collected from 580 women with and without symptoms of preterm labor. About half of the women in the study were black.

In both groups, a positive fFN result was significantly associated with preterm birth occurring within 14 days of testing. However, the actual likelihood of delivery early was still rather low. Like other studies, this one also showed that the strength of the fFN test is it's negative predictive value. That is, the absence of fFN is a much stronger indicator that preterm birth won't occur.

IL-6 was also significantly associated with preterm birth but only in the black women. Like fFN, it also wasn't a strong predictor in this population but it was much better than fFN in either the black or non-black groups.